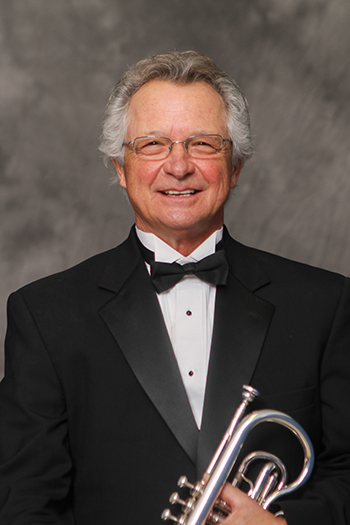 Ken Bauman has been a member of the Brass Band of Battle Creek since inception in August 1989, playing both cornet and flugelhorn. In April 2004, he was featured as guest conductor of the BBBC.

Ken felt it was an extraordinary honor to have the Dr. Waldo Frankenstein endowment chair given in his name in 2001.

During his distinguished career as a musician/educator, Ken served as Professor of Music at Spring Arbor University. Seventeen of his 25 years at SAU, he served as Department Chairman. He also conducted the Concert Band, Jazz Ensemble and many other small groups. Ken is a former member of the Battle Creek Symphony and served as principal trumpet from 1974–1989. He was also the conductor of the Grand Rapids Symphonic Band 1988–1998.

Ken is a highly respected adjudicator and clinician and continues to work with the Michigan School Band and Orchestra Association. He maintains a busy schedule judging band and orchestra as well as solo and ensemble festivals and appears as guest conductor in many venues including honors bands, community bands, high school and college bands.