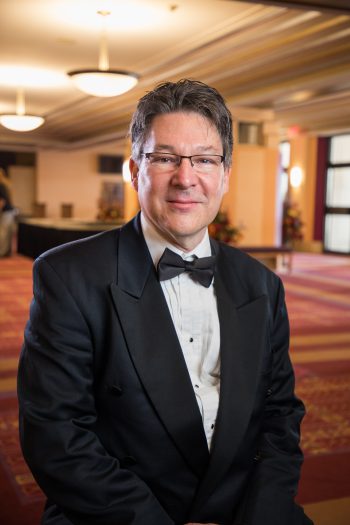 What is special to me about the BBBC:  The BBBC is a Fantasy Brass Spa. It’s the Love Boat for Brass. It’s the Harlem Globe Trotters playing at the local high school then joining the community for refreshments in the cafeteria. Everybody wins.

What is special to me about Battle Creek:  It’s the home of the BBBC and America’s breakfast table. 100% Wholesome!

Scott Hartman heads the trombone department at Yale University. Scott is a founding member of the Yale Brass Trio, the Millennium Brass, Proteus 7, Four of a Kind and he a longtime member of the Summit Brass. He began his chamber music career playing with the famed Empire Brass and has played with the Brass Band of Battle Creek for 25 years!

In addition to teaching and performing, Scott runs a publishing company for brass music, Firebird Editions, and has developed and produces his own line of Hartman mouthpieces. For more information, go to www.slushpump.com