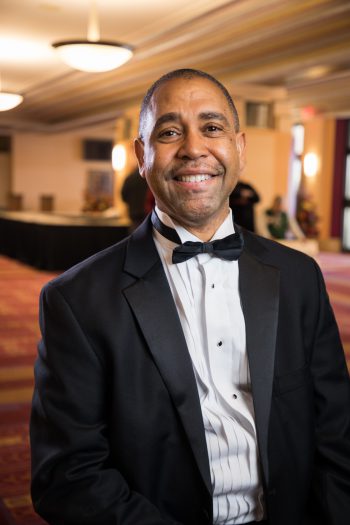 Where you might have heard me perform: See bio

What is special to me about the BBBC:  The musicians and the entire organization and crew!!  The BBBC is not just comprised of the best brass musicians in the world, they all treat me as family!

What is special to me about Battle Creek:  Historic city, quite special for me as an African American.  Ideal place for us to gather and cultivate our art and souls.

Leonard (Lennie) Foy is Professor of Trumpet at DePauw University in the School of Music. A
native of the “City of Arts and Innovation”-Winston-Salem, NC, he was born to both a musically
dedicated community and musically gifted family. His mother, Elsie Griffin Foy, is a retired
soprano and distinguished music educator. His father, the late Bernard T. Foy, Sr., was a renowned pianist and former Supervisor of Music for the Winston-Salem/Forsyth County schools. In 2017 his alma mater, R. J. Reynolds Senior High School-a nationally celebrated arts magnet for the past decade, honored the first of its most creative alumni by inducting Lennie as an inaugural member of the “Arts Hall of Fame.”

Lennie is one of the most versatile trumpeters of his generation. Praised as soloist, chamber musician, collaborative artist, and clinician in both jazz and classical performance arts his career includes performances with a variety of celebrity artists and ensembles at prominent venues in the US, Canada, France, Italy, Spain, Turkey, Finland, Argentina, England, Egypt, and Russia. His appearances include extensive engagement with the Nashville Chamber Orchestra, Grammy Award winning Nashville Symphony Orchestra, inaugural member with both the Gateways Festival Orchestra for classical musicians of African descent and also the Smithsonian Jazz Masterworks Orchestra acclaimed “the best Jazz Repertory Band in the country” (The New Yorker), and performing cornet since 2003 with the Brass Band of Battle Creek , admired as the “Rolls Royce of Brass Bands” (Brass Band World). His performances with a wide range of conductors includes jazz notables David Baker, John Clayton, and Quincy Jones to maestros Kenneth Schermerhorn, Leonard Slatkin, and Giancarlo Guerrero. He currently resides in Indianapolis, IN where he maintains a regional presence as soloist, orchestra musician, jazz, big band and small group performer, chamber musician, and veteran studio recording artist for
prominent publishing and production companies.

Professor Foy holds the Bachelor’s and Master’s degree from the University of Rochester (NY)-Eastman School of Music where he was awarded the coveted Performer’s Certificate and has completed extensive work as a Doctoral Candidate at the Indiana University-School of Music in
Bloomington, IN. Lennie is a Conn-Selmer artist.