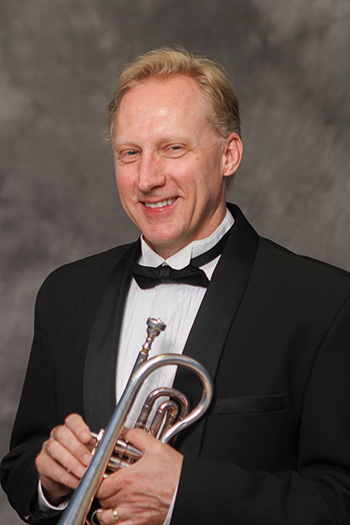 He performs as co-principal trumpet in the Central Wisconsin Symphony Orchestra and first trumpet in Lawrence Brass. He has played recitals in Carnegie Hall, the Kennedy Center, throughout South Korea, and throughout the United States. As a jazz musician he performs with the Lawrence University faculty jazz group and has appeared with Lionel Hampton, Bill Watrous, Wycliff Gordon, Marvin Stamm, Vinnie DiMartino, Phil Woods, Ernie Watts, The Nelson Riddle Orchestra and many others.

He conducts and solos annually for the West Texas Rehabilitation Center Telethon Orchestra. Mr. Daniel released “A Calling” in 2004, a jazz CD featuring his own compositions and is featured on a 2006 Mark Masters release, “Karel Husa Trumpet Concertos.” The Husa CD was on the entry list to be nominated for a Grammy Award in the category “best solo with orchestra” and “best classical recording.” He has been a member of North America’s finest brass band, The Brass Band of Battle Creek, since 1993 and plays Schilke trumpets, flugelhorn and cornets exclusively.

In April of 2011, Mr. Daniel self published a trumpet method, “Special Studies for Trumpet.” The book represents a lifetime of practicing and teaching the trumpet. It is used by members of major symphony orchestras, leading freelancers in New York and Los Angeles, soloists and college trumpet teachers at major institutions including the Juilliard School. It is available at: johndanieltrumpet.com